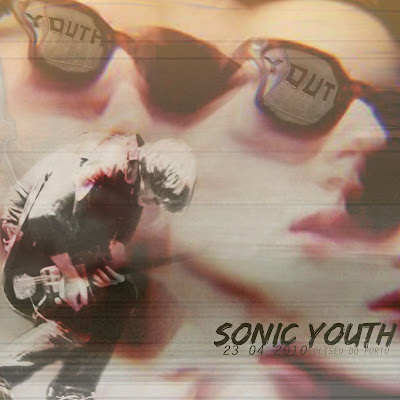 If it wasn't for the two encores, this would have been a very nice concert from a band that proved to still be -- as if they needed to -- in great shape. With the two encores featuring songs as "Candle" and "Death Valley 69" this was a memorable concert. I'm not one of those who thinks that Sonic Youth should be paying more attention to their old stuff. No, they don't really need to. They're still releasing good and relevant material. Yesterday -- as in their recent shows, with the exception of two dates in Spain last week due to Mark Ibold's absence -- they played The Eternal almost in its entirety in a bit more than one hour plus two songs from Sister, "(I Got A) Catholic Block" and "Stereo Sanctity". The album works extremely well live, but it was the last four songs that made the night so special. And this is not a bad sign. This is what happens when a band has to carry the burden of releasing albums such as Daydream Nation and EVOL relatively early in their career. Albums that were not only genre-defining, but also crashed into people's lives and crossed generations.
The recording is not as bad as i thought it would be, considering the high, echoing ceiling of Porto's Coliseum and the fact that i was way more focused on Kim Gordon's legs than on my recorder. Anyway, you can tell for yourself.
Setlist

Download: Sonic Youth at Coliseu do Porto
Published by joão at 15:40

thanks for taping! mp3??? is your master mp3 or .wav? love to have .flac version...cheers!

@richard, drop me an e-mail if you want the files on wav or flac.

oh man, really, many thanks.
stay w/ that attitude :-)