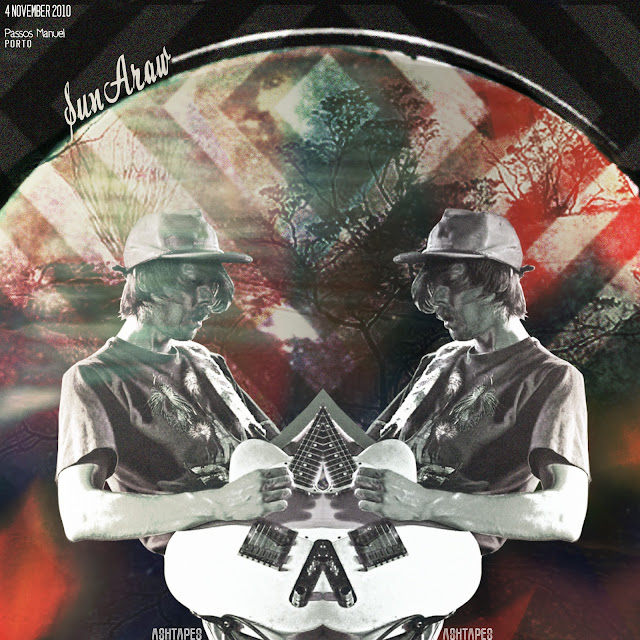 Sun Araw Live at Passos Manuel
Porto, Portugal 04.11.2010
Recording Equipment: CA-14 > STC 9100 > Tascam DR-07
Just a few weeks after the release of his new EP Off Duty, Cameron Stallones aka Sun Araw -- who is also responsible for one of this year's essential LPs, On Patrol -- played a much anticipated gig in Porto. The concert took place last thursday in a small downtown cinema and was part of Sun Araw's european fall tour with live collaborator (and Sohni Chambers partner) Nick Malkis.

Using reverb-drenched guitar lines, looping pedals, haunted organs, old-school samples and Stallones' mantric vocals, Sun Araw took us on a splendid sonic trip that has as much of adventure as it has of nostalgia. And I think this audio recording pretty much captures that cosmic, past-meets-future blending of tropical psychedelia, dub, drone, reggae, free-jazz and afrobeat that makes Stallones one of the most interesting and creative artists from the prolific city of Los Angeles.

I can't figure out which are the missing songs from the setlist so they might be new tunes or just something that I'm not recognizing -- any hints would be appreciated. As a teaser, I've uploaded below Sun Araw's stunning cover of Neil Young's "Barstool Blues". Enjoy!

Raw Moans' first album we want it beautiful NOT REAL makes me think of a gray, cloudy city with tall, abandoned buildings, all their windows covered in dust and dirt. The songs are eerie, minimalist reworkings of R&B songs from the 90s. Joseph Vorachack's voice sounds both melancholic and warm, even when he is singing explicit verses from Snoop Dogg's "Ain't No Fun (If the Homies Can't Have None)." Joseph wrote out responses to notes I had made for a proposed phone interview, and I retrofitted questions based on my notes to his responses.
CONTINUE READING »
Published by ` at 14:45 0 comments