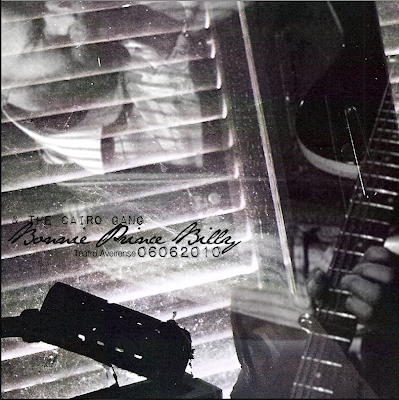 You never know what to expect from Bonnie 'Prince' Billy, Will Oldham's complex and fascinating pseudonym. Yesterday night, in Aveiro, he was in a good mood, he was wearing an incredibly tacky outfit and, most noticeably, he was shaved -- he still had a nice mustache, but that's nothing compared to his previous ambitious beard. He was also accompanied by Emmet Kelly of The Cairo Gang on the acoustic guitar, Susanna of Susanna and The Magical Orchestra on the vocals and special guest Shahzad Ismaily of Secret Chiefs 3 on the electric guitar. For one and a half hour they took us to the heart of the old America through beautiful alt.Country landscapes and stories about freedom, love and sex.
The setlist was mainly focused on the tracks from the Bonnie 'Prince' Billy & The Cairo Gang collaboration album, The Wonder Show Of The World, released earlier this year. To avoid running out of songs, they also turned to the traditional american folk songbook ("Love Is Teasing", "In Spite of Ourselves", "Shine It On Me", "It's Been Rough And Rocky Travellin'") and Susanna's material ("Better Days", "Home Recording"). For the 5-song encore, Bonnie broke the protocol and played a classic from his own solo discography -- nothing less than a completely acoustic version of the much-requested "I See A Darkness". You can watch a video of this memorable moment here and, of course, download the complete live recording below.

Thanks for this excellent recording!! Some additional information:
14. Shine It On is actually You Might as Well Smile
18. It's Been Rough and Rocky Travellin' is actually Me and Paul

Stumbled on this a little late, but thank you so much for sharing.