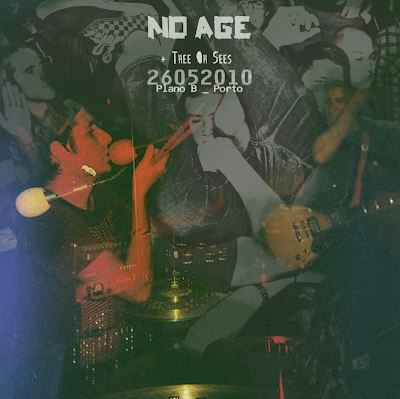 I don't know if it was because of the tough night in Lisbon the day before, but I guess No Age's sound engineer Scott Cornish missed something during the band's first gig in Porto. The sound was a bit messy and it was difficult to hear Dean Spunt's voice. I wouldn't say it was that big of a deal, but apparently people here are kind of sensitive. The (small) room wasn't full from the beginning -- the fact that the incredibly dull The XX were playing a long-time sold-out gig that same night in Porto may explain something --, but at the end it was almost reduced to half. And that was a pity because despite all the setbacks, No Age were actually playing with intensity and devotion. Unfortunately, this is the kind of concert that needs to be fueled with sweat from the crowd, there has to be a physical connection between both parts, otherwise it doesn't work -- as it didn't. During "Miner", the last song of their short set, Randy Randall even passed his guitar to the crowd, probably expecting people to have fun with it, but all he got was a very shy reaction. I mean, it wasn't bad and of course there were a few people actually having fun, but it lacked the energy you're expecting in a No Age concert. Guess this trip to Portugal was just doomed from the beginning and I really hope they come back soon in other circumstances. Lo-fiers Thee Oh Sees, on the contrary, gathered a lot of sympathy from the audience, surprising everyone with a killer opening set of flippant psychedelic rock songs.
You'll get all this if you hear the recording.

it's a pity, but it was to be expected, with a gig at such a venue as Plano B....long live Oporto's "indie elitism".

Great recording for Thee Oh Sees! Thanks so much! Track 8 is called Contraption.
See http://atmyheels.blogspot.com/
for more TOS recordings by my friend and me.