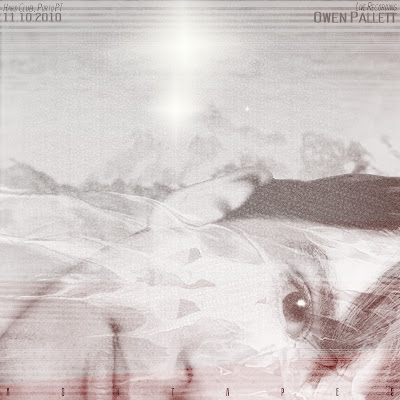 Owen Pallett Live at Hard Club
Porto, Portugal 11.12.2010
Recording Equipment: CA-14 > STC 9100 > Tascam DR-07
First of all, we would like to apologize for our lack of updates over the last month. We’ve just been busy with some personal issues (Ashtapes is soon moving to London) and haven’t found the time to update the blog at all. But I can’t think of a better way to return than a full live recording of the immensely talented Owen Pallett, who played in Porto’s Hard Club last Saturday.
Alone on stage, using solely his voice, a violin, a synthesizer and looping pedals, Pallett, who looks like a young nordic prince, dazzled the audience with his looping technique (which is similar to the one used by Andrew Bird), overlapping live crafted layers of his own arrangements, sometimes sounding like a whole orchestra, and giving a new insight into his beautiful chamber-pop tunes. Heartland, one of this year's best long-lengths, was obviously under the spotlight, but Pallett did not forget about the time when he shared a name with a video game, playing several Final Fantasy beloved oldies such as set openers “The CN Tower Belongs to the Death” and “He Poos Clouds”. Unlike some past shows, multi-instrumentist Thomas Guill, who is a central piece on the sound of Pallet’s new EP A Swedish Love Story, did not join him on stage, which resulted in a slightly different approach to the songs of this release.
The set closed with the usual cover of Caribou’s “Odessa” ("I don't make dance songs", he said), but, as this was the last show of his european tour (meaning, in his own words, that “we’ll play a long time and get kind of wasted”), Pallett played two encores from which I would definitely highlight a glorious interpretation of a Bach’s arrangement seamlessly mashed up with the wonderful “Many Lives -> 49 MP” that you can stream below.
Setlist:
1. The CN Tower Belongs To The Death | 2. He Poos Clouds | 3. Don't Stop | 4. Scandal at the Parkade | 5. This is the Dream of Win & Regine | 6. Midnight Directives | 7. E is for Estranged | 8. A Man With No Ankles | 9. Keep the Dog Quiet | 10. The Great Elsewhere | 11. Lewis Takes Action | 12. Odessa (Caribou Cover) | 13. Lewis Takes Off His Shirt | Encore I: 14. The Lamb Sells Condos | 15. Bach vs. Many Lives -> 49 MP | Encore II: 16. Oh Heartland, Up Yours!
Owen Pallett - Bach vs. Many Lives -> 49 MP (Live) by ashtapes